My Great Uncle, Blencowe Edward Green, was one of seven children born to Herbert Edward Green and Georgiana Wright.

He was the second son and third child, born on 5 January 1896 in Somerleyton, Suffolk, England.

The family emigrated – first father in 1912, then mother and younger children in Oct 1913. Blencowe and his older brother Vaughan worked their passage on the “Themistocles” – Vaughan in 1912, and Blencowe in 1913, arriving on the 1 August in Sydney.

Blencowe was killed in action at Pozières on the 18 July, 1916, aged 20. The Battle of Pozières was a two week struggle for the French village of Pozières, and the ridge on which it stands, during the middle stages of the 1916 Battle of the Somme.

He is buried at Fleurbaix, Nord-Pas-de-Calais, France, 347 Rue-David Military Cemetery, Grave Ref I. E. 45. My brother, who is in the Royal Australian Navy, visited the grave with his family and placed the legacy badge on Blencowe’s gravestone in the attached picture.

His name is listed on the Roll of Honour, Australian War Memorial, Canberra, and the attached picture shows the poppy I placed there on my visit to Canberra.

Photo below of Blencowe's name on the War Memorial at Canberra, Australia 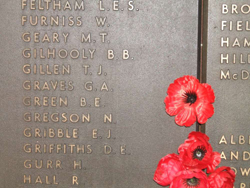