EMIGRATION: WHERE TO GO 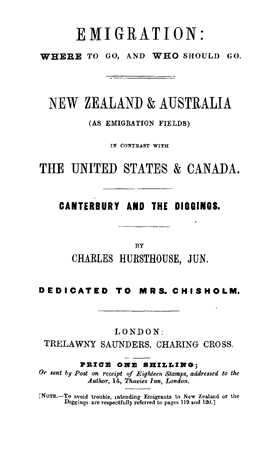 This publication was written up from the experience attained during a five years' residence. It firstly lists its own reviews by the press of the day, including the Spectator, Leicester Mercury, Norfolk News, and the North of Scotland Gazette.

The writer extols the virtue of migration over remaining in the UK living amongst armies of paupers, idlers, beggars, criminals, and prostitutes! An environment lacking food and suffering from prevalent disease, living in filthy towns and cities plagued with rats, cats and dogs! Living in an environment where the average tradesman lacks customers and thus an adequate income to feed his family, and yet has to support the poor and idle by his taxes!

The argument then put forward for moving to New Zealand is that it has none of the above impediments! A brief history of New Zealand is presented (starting at p29) followed by the natural features of the country (from p33), the Maori (p36), the towns (p43) including Auckland, New Plymouth, Wellington, Nelson, Canterbury, and Otago.

The writer then addresses the advantages of living in New Zealand (and Australia) over the United States and Canada, and even manages to extol the virtues of what could only be a long unpleasant sea voyage (the voyage is far more distasteful in apprehension than in reality). A hundred days or so at sea afford an excellent opportunity for a course of useful reading, for improvement in any particular science or study. (p67)

The book concludes with a series of appendices to strengthen the case for emigration. Useful tables relating to climate, disease, positive letters from settlers, appropriate apparel and needs for the voyage, housing, and even travel insurance are to be found in this section.

Old historical records are a valuable resource for local, family and social historians as well as for researchers in other fields of history. They provide information on the environment experienced by the residents of the time and how they lived, as well as their occupations.

This is a unique and fascinating record worth exploring if you're researching your family history or building a family tree.