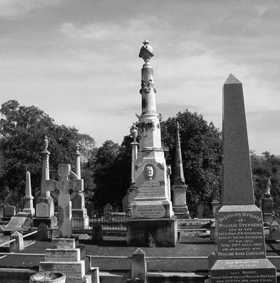 Do you have ancestry from South Brisbane?

indexes all monumental inscriptions in South Brisbane Cemetery, Dutton Park. Transcribed during the 1980s by members of the Queensland Family History Society, some more recent inscriptions were added while the current index was in preparation. South Brisbane Cemetery is under the authority of the Brisbane City Council. It was established as a general cemetery in 1866 but it was not until 1 August 1870 that the first burial took place - that of Mrs Jane Hocking.

Memorials range from those of prominent early residents to those of prisoners from nearby Boggo Road Gaol, including that of bushranger Patrick Kenniff who was hanged in 1903. The cemetery was closed to new burials in 1961-2 though burials continued in family plots and a small number of new plots were released in 1998-9.

In general the Portion of the monument is recorded, however, in some instances Portions have been grouped together as it is not clearly defined where the boundaries lie: Portions 2C and 2D; Portions 2A and 2F; Portions 4B and 4C; Portions 7A and 7C, Portions 7B and 7D; Portions 8A, 8B and 8C; Portions 10C and 10D.

Foreign inscriptions have been managed as follows:

This is a terrific genealogy tool for anyone exploring their family history in the South Brisbane region or building a family tree.

You might also find your ancestors in our extensive Census, Land & Survey Records